On a hot spring Sunday in Geelong, more than 100 Gamers and their entourages gathered at The Amazing Mill Markets Geelong to compete in the second Retro Video Gaming Championship.

Ably hosted and compered by Retro Game Geek, 5natch, the competitors faced a tough series of knockout rounds on five retro machines, specially slated for the event. Competition was fierce, culminating in several stages – including two semi finals – with a final four competitors battling it out on the Mario Circuit to take the title. Champion Gamer, Eddie Galinovic took the trophy at the end of the day.

There was also much excitement and dedication to beating the World Record on Kalamari Desert Mario Kart, with Gamers lining up to take their turn and beat the record. The best time at the end of the day was completed by Luke Cavalier, just three seconds under the World Record!

Elsewhere at the event, 20 different old school machines were set up for Gamers young and old(ish) to try their luck, practice and test on the Atari with classic Pac Man and Space Invaders, the Nintendo 64 with Diddy Kong, and on the Sega with Dick Tracy.

5natch from www.retrogamegeeks.co.uk, our MC for the day, said “The event was heaps of fun – quite challenging for even the most experienced of Gamers, and it was a good and fair competition. It’s great to see some young blood in there now too – a new generation of Gamers who are used to seeing 3D graphics and advanced storylines, getting into old school and original games like Space Invaders – showing that they stand the test of time. I’m looking forward to seeing them at the next Retro Video Gaming Championship – it should be an even more feisty affair!”

Congratulations to the winners on the day, all the worthy competitors and of course thank you to 5natch for his compere styling. We’ll be posting 5natch’s video of what went down on the day very soon! 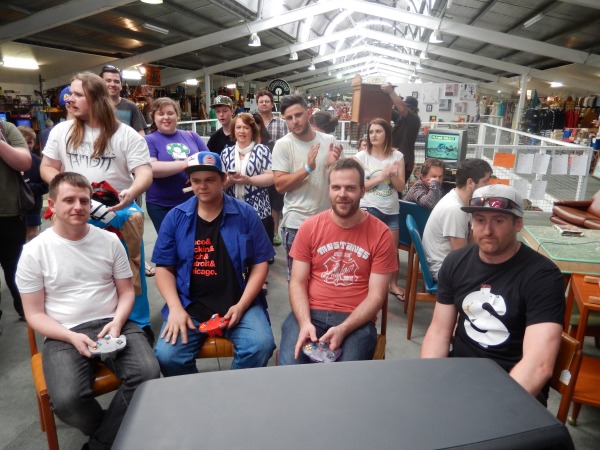 The Mario Circuit finalists get ready to take on the track