Last week Mark (owner of AMM and Archer’s father) received a letter from Santa who said;
‘Because Mark & Archer live in the country he and his reindeer were having trouble finding the house whilst planning their Christmas Eve route. So he would be sending his most trusted elf (coincidentally named Archie Elf) with his team of Elf helpers to light up Archer’s property in hopes he and the reindeer might then be able to find it on Christmas Eve.’
Mark along with amazed and excited Archer were confronted on Friday night when arriving home to this amazing light display.
Archer would like to thank Santa’s most trusted elf and his team for doing such a fantastic job. His only regret was that they didn’t leave out any food and drinks for the hard working elves whilst they were putting the lights up around the property.
To which Mark responded ‘How about we send Santa a letter to say that we will shout them all out for a meal at the Elfington Hotel.’
Mark says there’s no doubt now about Santa finding Archer’s home.
Merry Christmas to all. 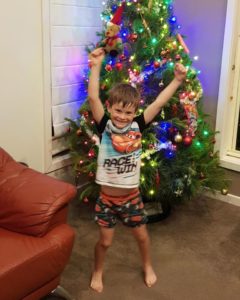